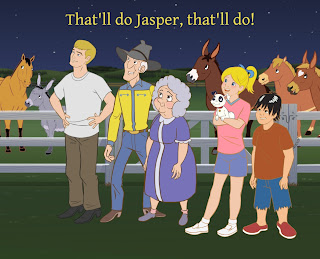 The project entitled Jasper the Mule wrapped today after more then two years of hard work from the Powerhouse crew. Out of the four direct to DVD features, I had the honor of working on "Turkey Time" and "Fabulous Fourth". My work included the animation of the 3D assets in the final shot of Turkey Time, as well as some of the lip sync for the character Louise. I also contributed to the clean of the symbols used for Jasper the mule, as well as the post production of both features. In Fabulous fourth I created the fly's point of view scenes using Adobe After Effects. The above image was created using symbols and background from the final scene in Fabulous fourth (animated by Ronnie Wiliford and Aaron Roma) re-purposed by yours truly for the celebratory cake. Check out the official post at the Powerhouse Blog. 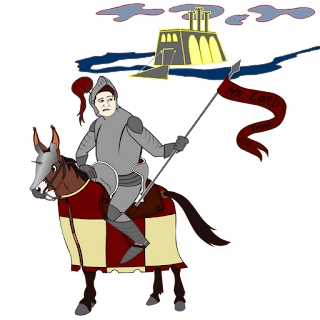 I created this image (with accurate medieval horse tack and armour) for Mr. Doug Beck's secret Santa gift Xmas 2011. Thanks for the guidance and encouragement Doug!
Posted by truncheonm at 1:52 PM